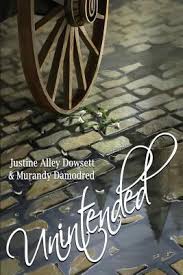 Let me start by saying this is a 3.8 stars rating.  I couldn’t quite give it a 4 and I’ll explain why.

The author(s) of Unintended have created an interesting story with a familiar theme, a young woman in an ancient time is sent to another kingdom as part of an arranged marriage to foment peace.  It is obvious the author(s) have the skill to write this tale and draw the reader into the scenes, setting the places and the action well.  Their talent in this regard is unquestioned.

The story : MacKenzie en Shareed of Haldoram, the High Clan chief’s daughter, rides to Ismer to wed Prince Kadrean.  A handsome man rides out to receive them at the gate, and ‘Kenzie’, obviously not instructed on any customs of Ismer, or prepared to ask questions and make sure she has the right man before her, immediately assumes this is her “Intended” and performs a seemingly simple ritual, wrapping a ‘small white-flowered wreath about his wrist‘ and placing another wreath upon his head, asking the stranger to repeat and recite a few words in her language.

The handsome man, thinking this is a harmless gesture of introduction, does as she asks.

Lord Garron D’Arbonne is surprised to learn that he just wed the young woman.

Garron, as well as the people of Ismer, see this misunderstanding as a harmless mistake that can be easily remedied if not ignored.  Kenzie, however, is adamantly devoted to the high ideals of the vows and the ritual and believes she can never recant or speak those words to another man without shaming herself and her family.

The characters were the biggest drawback for me.  Everyone seemed either superficial or formulaic to me.  There is some killing, betrayal and adult sex scenes that seemed to call for a more intense, powerful drama.  None of these characters were built to fill that role.

Kenzie was young but still I found her character to be continually petulant and superficial.  Her grasp of love and romance was just variable and vexing and not what I would have perceived coming from a tribe of horse riding clansmen who lived in tents and survived by the sword.  Her hardiness was petulance and that was unappealing.  And her lingo and handling of crises and situations often felt like that of someone from the 21st century.

The Royals in Ismer were far too abiding of her petulance.  Although they are presented as tough and stern, capable of back door deals, defying orders and betrayal, they were too pasteurized for an ancient kingdom.

King Raymundo makes it clear he doesn’t care about the mishap at the gate and he expects Kenzie to wed his son anyway.  The Queen doesn’t like Kenzie but seemingly tolerates her bowing one minute and smarting off the next, giving her stern warnings but not much else.  Kenzie just feels as if the whole world is against her.

And just like Kenzie’s first impression of Garron at the gate was improper and shallow, her first impression of her intended, Prince Kadrean, is also.  She seems to choose right from the beginning, not to like him, labeling him pretentious without any real reason to do so.  She also considers it abusive when Prince Kadrean, one time, grabs her tightly by the wrist.  In an ancient times, where women are treated as chattel, and wedded off to seal treaties, this seemed the least of the abuse she might have received and expected, especially when she continues to defy and say inappropriate things in court.

There is a whole tale of intrigue that keeps the reader engaged in the story as a whole.  Kenzie finds ways to be near Garron and the two develop a relationship which results in her getting pregnant.  King Raymundo doesn’t care and still insists she wed his son, and bed him to make everything look appropriate and above board.

Kenzie plans her escape although she continues to vacillate, wondering if she should go and risk war, or stay, keep the peace and obey her father.  And then she is more or less locked in the palace and forced to spend more time with Prince Kadrean, whom she thought she loathed.  After a few meetings, she comes to find that he is actually nice.  She feels sorry for his situation and thinks she might be falling in love with him too.  Knowing she is planning to escape, she decides to sleep with him anyway, for pity sake I guess, which totally sends him the wrong signals.

Don’t get me wrong.  Much of the story is sound but the presentation fluctuates too often.  It can be a bit Shakespearean, a bit unmindful like a YA fairy tale and then suddenly daubed with adult fiction and sexual imagery.  I wish the author(s) would have made a firm choice and pinned it down more.  I think the absence of adult fiction and sexual imagery would have made for a really good YA Shakespearean fairy tale.  The characters were just not serious enough, not mature enough, not gruff enough for the sterner, grittier moments in their lives.  I would have also liked to have seen a King and Queen in Ismer that made Kadrean’s simple wrist grab seem like child’s play.  They were, after all, trying to seal a treaty that would avoid a war and the petulant behavior of a young girl wouldn’t have been acceptable, period.

I finished reading the book.  It was good enough to finish reading.  There are many strong scenes and writing I think people would enjoy.  It shows promise.  3.8 stars.

Allen M Werner is the author of the epic fantasy series, The Crystal Crux.
Click Here to see the Amazon Author’s Page of Allen M Werner

One thought on “Book Review of Unintended”