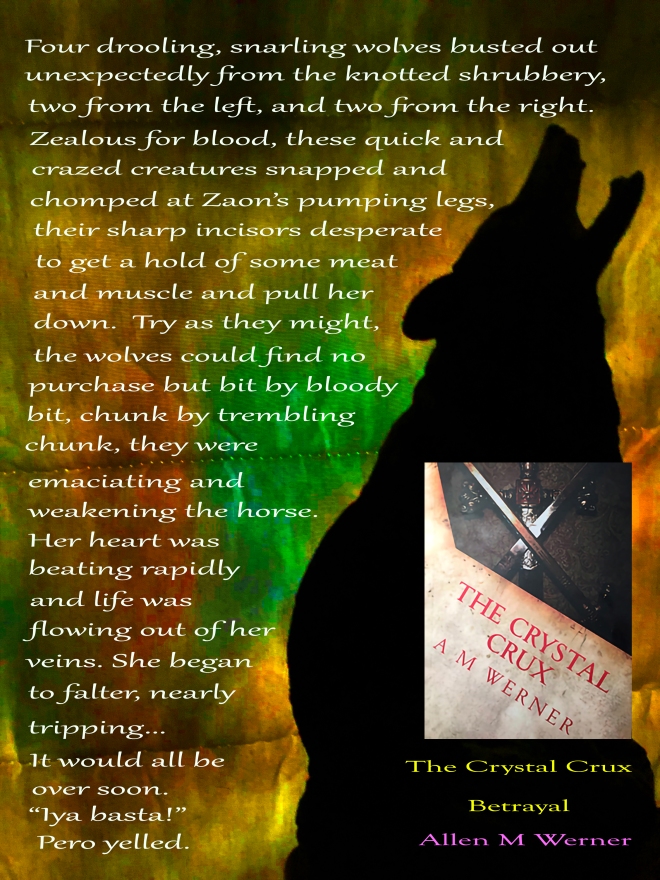 In Betrayal, the first book of The Crystal Crux series, Guidus Salvatore, the Provost of Parthenope, is sent to Capua to deliver an important message to the keep’s current administrator, Pero de Alava.  Guidus was none to happy to perform this demeaning task but the Lord Commander of Parthenope, Gherardus Fabbro, assured him it was a noble mission and no one else could be trusted with this responsibility.

In the hot upper hall at Capua, Pero’s estate steward, Francis Whitehall, read the letter aloud while Guidus sat nearby, Pero digging into a platter of food brought to him from the kitchens.

“Pero de Alava, you are hereby commanded to take immediate leave of your post at Capua and marshal the exchange in Melfi.”

The notice stated that a woman named Meliore had been taken captive on the east side of the peninsula and an independent arbiter was required to deal with the ransom demands.

Pero was already in a state.  At a recent banquet, Pero had broken the jaw of Rugerius Fabbro, the Lord Commander’s eldest son and Castellan of Parthenope.  (For any who don’t yet know it, Parthenope is Naples – the ancient name of the Italian city).

Pero was recently engaged to a Greek beauty, Anthea Manikos.

With the recent death of the Emperor, Pero’s assignment at Capua was tenuous and threatened.  With the Fabbro family and the Church setting their sights on him, he was feeling overwhelmed.  Europe was embroiled in civil wars.  Commanders were getting assassinated.  Blood was being shed.

Pero couldn’t sleep.  Dreams and visions, nightmares had been haunting him.

“You will avoid Benevento and travel directly to Melfi utilizing a remote and ancient trail known as Eagles Pass.”

Francis suspended his reading.  This command was absurd.

Pero’s mind was already conjuring up images of the creatures, based on legends, he might face out there.

After the meeting ended, Pero met with his intended in her bower.  Anthea couldn’t believe her ears when Pero told her about the letter, the orders.

“No, this cannot be true.  No one travels on Eagles Pass, not anymore.  It is too dangerous.”

Pero had already made up his mind and wasn’t listening to her.  He’s leaving and broke off their engagement.  The visions and the responsibilities, the threats to him, the keep and his loved ones were too much to bear.  Pero convinced himself that riding out on this mad quest would save his people from the Fabbro family’s wrath.

They would all be safer with him gone – a scapegoat.

At the end of Book Three – Cold Knight, Gisele Sartore, recalls a fishing trip she took to Lake Elena with her brother, Cambio, Domenico Capozzi, and his two sons, Filippo and Omero.  The Eagles Forest was on the other side of the lake.

Domenico tells them about the forest.

“None go over there anymore, none but the brave and desperate.  When I was a boy, the Eagles Forest was paradise.  Everyone went there.  There was good game, grouse and deer, as well as sturdy lumber for building…  In the summer months, a great convocation of golden eagles … filled the skies.  It was thick with them.”

We know this to be true from the very start of Book One: Betrayal, when Meliore Fabbro, waiting in her husband’s study, remembers travelling on Eagles Pass returning from Melfi, ordering “the coach driver to stand down for an hour as she broke her fast and admired the sight.”

Domenico Capozzi told the children more about the Eagles Forest, embellishing his tale, hoping to keep them from ever going there.

“Ten years and up, a great stink arose.  The trees began to decay, weeds killed off the grass and flowers.  The game disappeared, some of it torn apart by some invasive carnivores, their twisted little carcasses decomposing on the Pass for all to see, as if they were left there purposefully, to ward off future travelers.  It was a dark time.  People started to be attacked by things they could not describe, first at night and then in the light, until there was no light.  A mysterious cold edged in, blanketing everything, even on the hottest days.  The Imperials tried to clear the dangers out but regiment after regiment were obliterated.  They had no luck or charms to wield against the magic, and it was magic, no doubt.  Black magic.  Something wicked had taken root.”

And for those who have read all three books already, know Gisele, young, hardly any coverings, and shoe-less, has entered the Eagles Forest hoping to find Pero.

You really need to read these books…