The Sea Of Swords by R.A. Salvatore is the fourth and final book in the Paths Of Darkness series.  It is the reunion episode of the Companions of the Hall.  The barbarian Wulfgar finds his way back, mentally and physically, to fight alongside his friends once again.

The tale begins with a surface elf named Le’lorinel who is determined to kill the drow elf Drizzt Do’Urden.  We are kept in the dark until the end as to this surface elf’s reasoning for seeking vengeance on Drizzt.

Le’lorinel’s path, guided by a mystic gnome, E’kressa the Seer, leads to a pirate, Sheila Kree.  Sheila and her army, which includes a host of ogres, the powerful potion-enhanced Chogurugga, have a mighty warhammer known as Aegis-fang.  Aegis-fang was stolen from the barbarian Wulfgar back in Luskan,  E’kressa assures Le’lorinel that Drizzt will eventually seek out his friend’s missing warhammer in search of him – and that is how the two elves will finally meet and battle.

The pirates are none too concerned having the surface elf join their company as they are landlocked for the time being, holed up in their cave hideout, Golden Cove, for the winter.  They can’t do any more raiding until the spring thaws come.

Meanwhile, in another part of the world, in Ten-Towns, Drizzt, Catti-Brie, Regis and Bruenor Battlehammer ride out to protect the towns from rogues raiding their caravans.  They capture a woman named Jule Pepper who bares a strange marking, a tattoo that could have only come from Aegis-fang.

Aegis-fang was crafted by Bruenor Battlehammer.  He gave the warhammer as a gift to his adopted son, Wulfgar.

The markings Jule Pepper bares are distinctly Bruenors’ and from this weapon.

Despite the onset of winter in Icewind Dale, a dangerous time to travel, the four decide they must battle the elements and learn of Wulfgar’s fate, if he yet lives.  He would have never willingly parted with Aegis-fang.

Their mission to locate Wulfgar sees them battling storms as well as a host of goblins and ogres and pirates in Watersdeep.

Morik the Rogue is back and I really enjoyed his character in this installment.

Wulfgar’s woman from the Cutlass in Luskan, Delly Curtie, caring for the child, Colson, learns she is not safe in Watersdeep in Captain Deurdermont’s home. 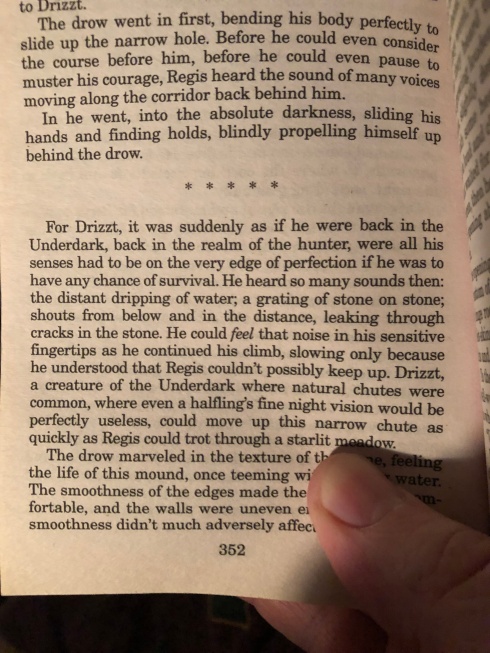 The writing in Sea Of Swords is first-rate Salvatore, adventurous, lighthearted and enthralling.

And while I was heartened to see the five companions reunited once again, my one complaint would be the ease at which they are reunited.  It seemed too contrived – and I’ll not say more about that.

Wulfgar’s time on-board the Sea Sprite with the pirate-chaser Captain Deurdormont and the wizard Robillard are interesting enough but Robillard’s use of magic to do things, locate things, watch over things, provided too many simple solutions for real problems.  Again, I’ll not say more.  I did enjoy Robillard’s character more in this edition than in previous ones

There is still plenty of excitement throughout and my favorite characters are once again fun to follow.  I had no problem turning the pages.

5 stars, although I wish the author had found a better way to reunite the companions.

Allen M Werner is the author of the Epic Dark Fantasy series The Crystal Crux.