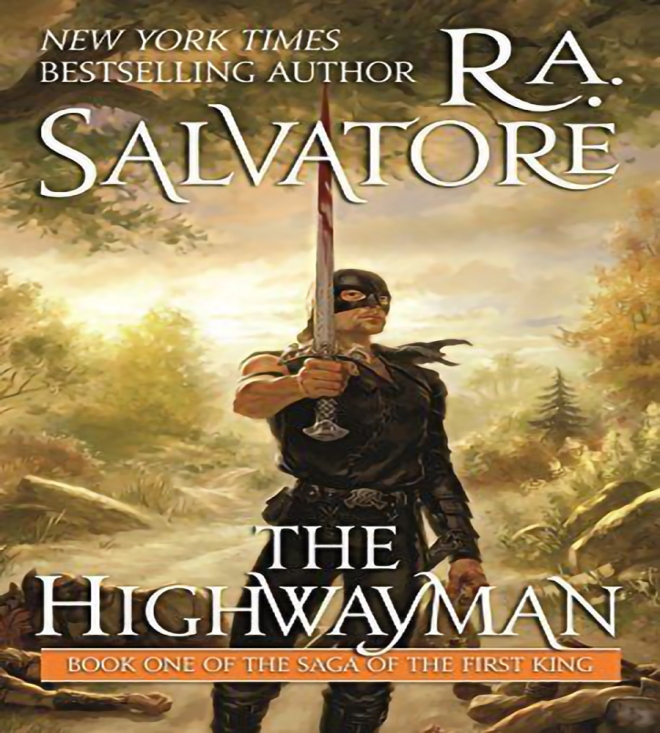 Posted on 07/23/2019 by Allen M Werner Posted in Other Authors and Articles EtcTagged highwayman, salvatore

Although it’s easy to think, judging by the title, the book cover and some of the reviews, that The Highwayman by R.A. Salvatore is a retelling of Robin Hood.  I can assure you it is not.

The tale begins with a Robin Hood-esque scene in God’s Year  74.

Prince Yeslnik’s coach, carrying him, his wife and taxes, is set upon by blood-thirsty dwarves called powries.  When all seems lost, the adventurous masked man sweeps in and dispatches the dwarves.  When the Prince offers his thanks and a reward, the Highwayman decides he’ll just take he gold and jewels they are carrying.  The Highwayman mysteriously heals one of the injured coachmen before leaving.

The story then goes back to God’s Year 54, before the Highwayman is born.

The beginning of the book tells the story of his parents.

Young Brother Bran Dynard of Chapel Pryd, a follower of Blessed Abelle, is sent to preach to the heathens living in the wilderness of Behr.

Bran soon discovers that the people of Behr are neither beasts nor uncivilized.  The monks of Blessed Abelle already use gemstones for certain tricks and healing but the abilities of the mystics in Behr, the Jhesta Tu, are far superior, and peaceful.

Smitten by Sen Wi, one of the dark-skinned mystic, Bran devotes his life to learning their language and mysticism, deciding that these teachings don’t go against his beliefs but rather, enhance them.

He weds Sen Wi, and the two of them travel back to his land with the copy of the book to offer this knowledge.

What Bran cannot fathom or anticipate is how closed minded the brothers of Blessed Abelle will be to these new teachings.

As they get nearer to home, Bran discovers that people might not be tolerant of his dark-skinned bride because the people of Behr are truly considered to be beasts.

We learn that there is also another religious sect vying for influence with the Court.

The Samhaist are more focused on the vanity of life, and accepting of death, not concerned with healing but rather sacrifice, human sacrifice, especially the criminal, the weak and the frail.  They are an order that inflicts punishment without mercy and are much loved in certain circles.

At one point, we read of a young woman accused of adultery, taken up before the priest of the Samhaist.  She is placed in a body bag with a serpent  After the serpent bites her, poisoning her, she is taken out of the bag and staked to a post on the open road to die a slow, painful death.

Pryd is a rather small, proud House in the land of Honce and the larger Houses are pressuring them to align with their Houses.  No choice has on whom they will serve has to be decided yet because the land of Honce is currently at war with an invading army of powries.  There is plenty of violence and mayhem as humans battle the red-capped dwarves.

Young Prince Prydae makes a name for himself in this war, alongside his large, indomitable friend, Bannagran,

There is some interesting political plot points thrown in to the mix giving the war and decisions of the Court in regards to the religions more purpose.

As Bran and Sen Wi come back into the land, they happen upon the woman dying on the stake.  Some powries are about to make off with her body.  Sen Wi surprises her husband as she unsheathes a beautiful sword and using the ways of Jhesta Tu, effortlessly defeats them.  She then heals the dying woman and they take her to Garibond, a reclusive old man Bran knows of.  He agrees to safeguard her until she is healthy enough to leave the area.

What we don’t know at the time is, when Sen Wi heals the woman, she takes the snake poison into her body knowing her mystical training can fend off the negative effects.  This is not so, however, for the child she is carrying in her womb.

After a series of contentious disagreements with his order at Chapel Pryd, and with the royals at Castle Pryd concerning this new mysticism and mysterious beast of Behr he married, Bran insists Sen Wi go to live with Garibond.

It was a wise decision for the Court decides they want Bran and the woman arrested.  Bran is taken prisoner by his own brothers in the chapel of Blessed Abelle who believe he has been tainted, and with a firm hand, they can cure him of this foreign woman’s influence.

Bran assures them Sen Wi went back to Behr.

After a series of events to help her husband, unsuccessfully, Sen Wi is badly injured.  When she gives birth, the child is stillborn.  Dying, employing what little magic is left in her, Sen Wi, give the child life.

The old recluse, Garibond is left to raise the infant on his own.

I’ve probably related more of the story than I should but it should be known that the child lives but is not at all healthy.  In fact, he can hardly walk and talk, always drooling.  Everyone, especially the other children, tease and harass him unmercifully, calling him ‘The Stork’ because of the awkward manner in which he walks.

The Highwayman surprisingly covers a lot of ground, touching upon a host of evils and virtues, prejudices and religious shortcomings.  The story ends with several important battles, one of which leads us to believe there is more to be known about the mystical realm the Highwayman is only beginning to learn about.

R.A. Salvatore has created another classic character, a boy that learns to overcome his handicaps and deficiencies to be the scourge of the rich and powerful, and the hope of the poor and starving.

It’s not Robin Hood.  It does contain some elements of Zorro, as in the masked man actually lives right under their noses while tormenting them.  But then again, who would think a frail, word-slurring, cripple living in a tiny cell in Chapel Pryd would be the swift and talented Highwayman.  5 stars.

One thought on “Review of The Highwayman”