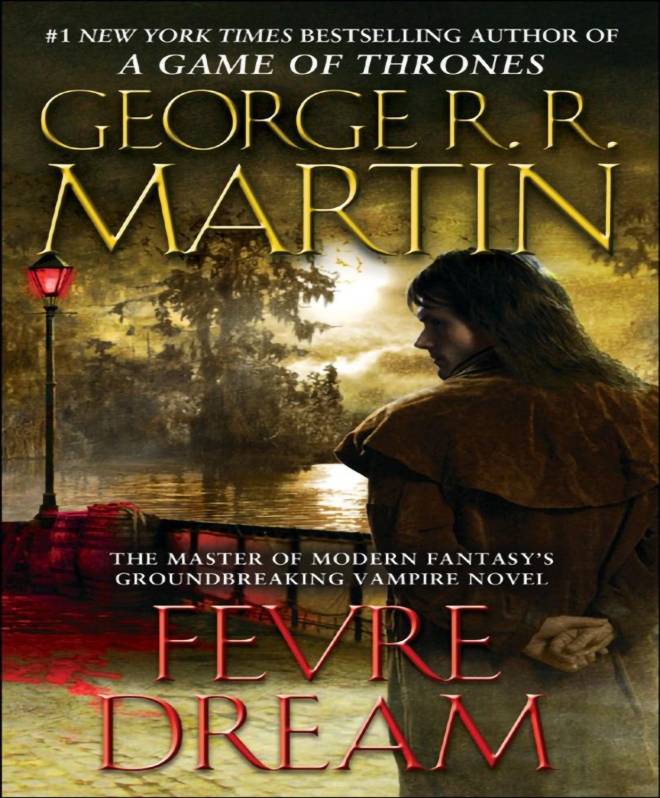 ‘Fevre Dream’ by Game of Thrones author George R.R. Martin, is lauded as a groundbreaking vampire novel.  I wouldn’t go so far.  In fact, I think fans of vampire novels might actually be a bit put off by it.

The story focuses on the relationship between Abner Marsh, an aging riverman down on his luck, and Joshua York, a handsome, pale-skinned aristocrat from Europe with questionable nighttime habits.

We, of course, understand from the get that Joshua is a vampire, or something like it, but Abner doesn’t, for such a thing to be true would be outrageous, and he is a pragmatic man not believing in monsters, none but men who behave as such.

Joshua comes to Abner offering to build him a new steamer, the biggest, fanciest, and fastest ship on the Mississippi.  In exchange, Joshua wants Abner to teach him how to captain a ship, pilot it, learn how to read the river, the currents, etc…  He also wants to be left alone during the day.  He makes it clear that he and his companions have peculiar idiosyncrasies that Abner and his crew will have to overlook and not question.

Abner and Joshua’s relationship grows steadily.  A friendship develops.  They both want to race other ships and place their fortunes on being the fastest on the Mississippi.  Abner, however, becomes more and more perturbed by his partner’s strange habits.  Joshua often requests they stop the ship at ports they had not intended or stay over longer while he sees to private affairs, holding up the delivery of the freight, cargo and people, giving the new ship a less than respectable reputation – and in the steamboat world, reputation is everything.

The author does a masterful job of keeping the reader locked in the world and the life of one living in the 1800s, especially those on a steamship.  People should also be warned that the language of the characters fits the time period so there are words customarily not used today, used as needed in the book.

“Deckhands and firemen and roustabouts spilled ashore… out ahead of the yawl, taking soundings… because of snags or low water in the chutes or cutoffs… paddles barely turning… Quarter twain… Quarter less three… Mark three…  some night it was hard even to spy the nighthawk, the device partway up the flagpole by which pilots gauged their marks…”

The effort put into writing this book is evident on every page, the meticulous attention to detail, the research the author did to tell this tale.  I’m not sure every reader will appreciate this.  At times, the story can feel weighted down because of it.

And for those seeking the sinful deviltry commonly associated with vampires, might feel there isn’t much here.  For the first half of the book, the exploits and murderous habits of these creatures are largely disregarded as bonds are built between Abner, Joshua and a host of crew and companions.

Abner, as it turns out, can’t take all the secrecy of his new partner and eventually breaks into his stateroom one night when he is off in the wood somewhere.  He finds little to educate him but bottles of a bitter tasting wine Joshua and his companions constantly indulge in, and newspaper clippings of horrible murders in places up and down the Mississippi.  He’s not sure what Joshua is into but he fears it.

Joshua, of course, learns that Abner invaded his sanctum, and while Joshua’s partners think Abner cannot be trusted with the truth, Joshua decides to reveal the truth about himself.  He explains to Abner who and what he is, where he comes from, and what he is doing here on the Mississippi.

There is a lot of exposition at this point which I thought slowed the story down a bit more.  It is was interesting but…

Joshua is convinced he is a bloodmaster and able to lead all vampires.  With a special drink he developed, he wants to help other creatures like himself (which he does not refer to as vampires), make peace with humanity and even return to their place of origin.  Joshua is on the Mississippi trying to gather up others like them and help them see the world the way he sees it.

Some of his followers, bound to him, are not convinced he has the power to overcome a truly evil vampire living down in the swamps around New Orleans area.  This fellow, Damon Julian, we learn in a few quick chapters, is truly evil and has a crew of his own, as well as a disgusting human caretaker named Sour Billy Tipton.  Billy is convinced if he serves long enough, Damon will turn him into a vampire.

Some of the assumptions of what vampires are don’t exist in this book.  The author has adapted and created his own unique creature.

I enjoyed reading it – and it does get bloodier and gorier in the last half of the book for real vampire lovers.

One other complaint I would mention in passing is the paperback version I was reading actually started breaking apart at the seems by the time I was halfway through.  It wasn’t bound well.  I wonder if others have had similar experiences with this or if my copy happened to be one of the few.

I’ll give it four stars.  If you like history, reliving the middle to late 1800s and have a penchant for steamer ships, and a dash of vampire activity, you will really like this tale.

Allen M Werner is the author of the epic fantasy series The Crystal Crux.