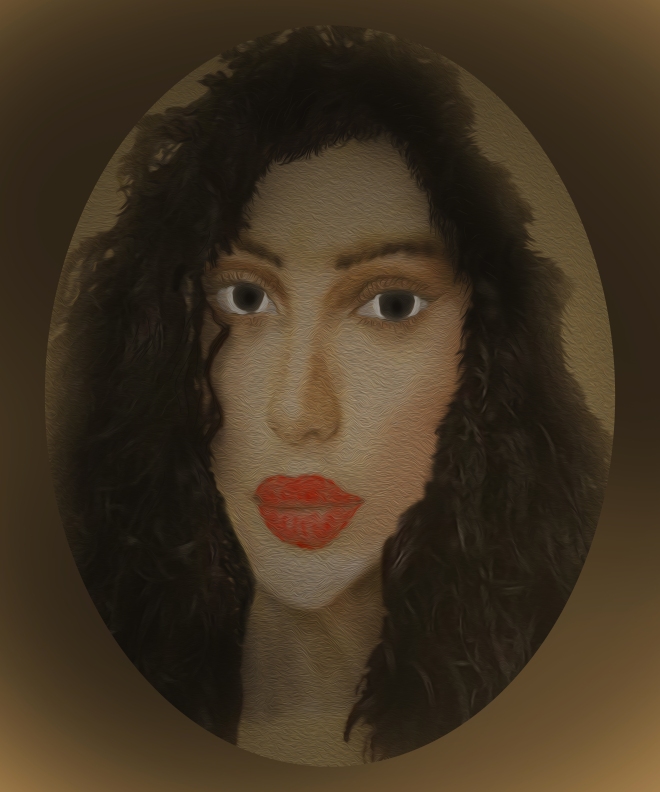 Viridian noticed a familair fragrance in the air, wafting over the waters. ‘Linden and lemon trees. I can smell them as though they were right here on the boat.’ She looked down into the black sea and a lump formed in her throat. The reflection of the stars reminded her of the yellow blossoms on those types of trees. She imagined hundreds of playful bees scooting harmlessly through her mind, through the blossoms, through the boughs and slanted sunlight.
‘Sacred groves.‘
Cold Knight – Chapter 15

Viridian is the daughter of Santi, a priest of the dragon-goddess Angitia, and Lady Anjalee, the younger sister of Bertina Fabbro.

Santi and Anjalee die in a shipwreck when Viridian is twelve going on thirteen. Although she had been in Parthenope several times, exposed to the city and the Court, Viridian spent most of her youth in the wilderness with her parents where she walked in the sacred groves with other worshippers of the dragon Angitia. Viridian was exposed to many rites and rituals as well as drugs.

After Bertina (Lady Bee) went mad, Gherardus decided they should adopt their niece hoping it might help his wife recover. It didn’t help at all. Bertina hardly acknowledged the girl’s presence. Other women at Court attempted to step in and aid with Viridian’s immersion into culture and schooling but Viridian rejected it. Humble and shy, feeling depressed and out of place, intimidated by the polite and fashionable ladies, Viridian quickly discovered her calling.

Viridian…. took one look at her older, knightly cousin, Rugerius, and lost her mind. Depression and grief transformed to manic obsession. She wanted him and thought of precious little else. When Viridian was thirteen, she stowed away aboard a ship… snuck into Rugerius’ cabin, disrobed and mounted him. The Castellan was drunk and alone. For the life of him, he could not recall anything about that first intercourse. He did remember waking up next to her…
Betrayal – Chapter 9

Rugerius is a horrible human being accustomed to taking advantage of everyone. Viridian proclaimed her infatuation and willingness to do anything, learn anything to please him. Rugerius put her to the test. She suffered at his hand but nothing he did dimmed her desire.

Rugerius was nearly sure Viridian was as mad as his mother just before she lost her docility. She learned from the other women who had pleasured Rugerius on how to please him. He enjoyed violence, so she became violent.

Viridian slapped him… With bold confidence, she laughed at him. She jumped up on the bed and started growling and snorting, scratching and biting, morphing into a mindless beast. Rugerius loved it.
Betrayal – Chapter 9

Despite all the abuse he ordered Viridian to suffer in those first three years, Rugerius decides eventually that Viridian is his, and unless they are attending a bacchanalia together, no other man should touch her. She is permitted to maintain her affairs with other women. Rugerius has no problem with this. Viridian offers no complaints believing that one day Rugerius will wed her and she will be Queen of Parthenope.

Viridian did notice that the giant magician Sinibaldus had taken a creepy interest in her. He was in his seventies, and she not yet twenty. And he was never seen with other women or at the bacchanalias.

On Day Three of The Crystal Crux tale, August 15, 1198, Sinibaldus visits Viridian while she sunbathes on a patio on the isle of Capri.

“Lay beneath the sheets. Grant me access to your intimacy, Viridian, and I will show you a world you have never known… I will secret you off to Clairedon tonight and share with you all the secrets of my Circus. I will commission a magnificent throne… everyone shall bow and bless you and call you Queen of Sin Circus.“
Blue Grotto – Chapter 21

The sun was burning the albino’s weak skin and he had to stay hidden beneath his dark cloak as he spoke with her. Viridian was disgusted by him, feeling as though he didn’t see her as Viridian but as someone else. She was sure of it.

“You are wretched, monstro disustoso. You stink of your toxic cocktails, your old man creams and putrid concoctions, evil and filthy. You disgust me.”
Blue Grotto – Chapter 21

Sinibaldus tried to impress her with the Bellerophon Crystal and the power he could wield with it but she was not deterred. As she tried to leave, however, he boldly laid hands on her, grabbing her by the arm with his long cold fingers. He told her that Rugerius didn’t want her anymore. He had decided to take another bride. Viridian was frightened by his claim and his forwardness, his willingness to manhandle her.

Viridian marched down into the men’s bathhouse to confront Rugerius. She demanded to know who this princess was and why he intended to wed this other woman and not her. Rugerius was patient at first. But after several warnings to forget about it, Rugerius snapped. He punched her in the face as if she were another man, an enemy.

“Stay in your place, girl. You will continue to serve my wishes for as long as I have need of you… You belong to me… And if you have a problem with this arrangement, Viridian, you best end your life.” Rugerius walked from the room making one last declaration before leaving. “If you attempt to speak to me of this again, I will kill you.“
Blue Grotto – Chapter 30

Bruised and suicidal, Viridian was prepared to take her life that evening when a strange black winged creature calling himself an imp landed on her patio railing. He was rather small and ugly and said he represented a mysterious and wealthy lord who had an unbelievable offer for her.

“Tomorrow night, just after dark. Take a small watercraft to the reefs near Baiae and disembark at the pier called Hell. Follow the path to Lago d’Averno. We will be celebrating at the Temple of Apollo… We honor Pan. There will be wine and food, song and lovemaking.”
Blue Grotto – Chapter 34

Seeking revenge on Rugerius, out of options and desperate, unwilling to turn to Sinibaldus for assistance, Viridian agreed to meet with Lord Ophis.

Without telling anyone, employing a pirate and former drug provider, Animalis, Viridian was taken by rowboat to Port Hell, a tiny abandoned pier in the middle of nowhere.

The wood before her began to warble as though an enormous bubble manifested itself from thin air. Thin snakes of golden light began to push through the bubble, crack through the darkness, peel back the trees. The boughs and branches bent and twisted. The sky turned inside out.
Viridian tried to turn and look behind her but it was already too late. The energy of the anomaly was sucking her forward. Her long black hair flew forward over her face, blinding her, pulling her whole body in a direction she did not want to go.
She tried to scream but nothing would come out.
Viridian had really stepped in it this time.
Cold Knight – Chapter 16

Viridian was actually sucked onto the same road at a different time with a collection of celebrants, some clothed, others not, some human, others not. They were feasting and dancing. She eventually located Didian who was no longer a small, unimpressive impish creature but a larger than life man, strong and impressive. Anxious to meet Lord Ophis, Viridian went into the celebration and was drawn into the hedonistic orgy of sex and cannibalism. Biting and being bitten, riding and being ridden, Viridian sees a great black dragon land on the Temple of Apollo as she passes out from the ecstasy.

Viridian awakes the next day alone on a beach. Relaxed, content, unsure where she is or what she will do next, she goes for a swim in the still waters, noticing as she gets further out, a rancid smell. Skeletons and carcasses of celebrants from the night before come up from the depths and surround her, locking her in. Panic sets in.

Something enormous and black swooped down directly from the sunlight… Its wings threw forth a mighty wind, pushing back all the corpses in a circular wave… claws slammed down hard on her bare shoulders and pushed her underwater…. And then the creature threw down a powerful flap of its enormous wings and lifted himself and Viridian out of the lake. With another flap, they were completely clear. Like an eagle bearing its quarry back to its nest, Viridian hung there motionless… Blood dripped from her shoulders, down her chest, over her back, in her hair, off her legs and leaving by her toes… In a matter of moments, Viridian was soaring high, looking down on the earth… The creature’s head turned down and cast Viridian a smile. He was human. He was black. He was bald. And he was handsome as hell.
‘Didian?’
…
“No fear, my Lady. I promised you an audience with Lord Ophis. He is prepared to greet you now.”
Cold Knight – Chapter 24

Didian took Viridian to the volcanic crater Solfatara where she finally meets Ophis, the black dragon.